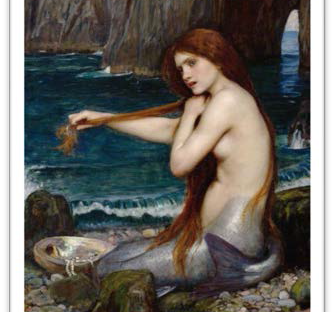 “My soul is full of longing for the secret of the sea, and the heart of the great ocean sends a thrilling pulse through me.” – Henry Wadsworth Longfellow

Mankind’s fascination with the sea has sparked imagination since the first person beheld its mighty waters. Curiosity led people to invent the means to travel across the great 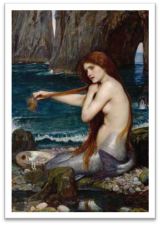 oceans and eventually explore beneath them, trying to discover their secrets. Throughout the centuries, millennia in  fact, people have created myths and legends about creatures living within the sea’s depths. One of the most alluring and formidable beings to inspire writers, artists, children, and adults is the mermaid, who entices men to a watery death. Mermaids have been forever immortalized in stories such as Hans Christian Andersen’s “The Little Mermaid,” but there is more to them than that story tells.

These sea nymphs exist in Slavic folklore as well and are called Rusalki. Believed to be the souls of young women who have drowned, they often appear as white or silver butterflies, which in many cultures symbolize the soul.

Although their sisters of the forests, the Samodivi, may be more popular in Bulgaria, it’s the Rusalki who have an entire week dedicated to them: Rusalijska Nedelya, or Mermaid Week, starts on Pentecost.

On Rusalska Sunday, Rusalki leave the deep waters to walk in meadows, spreading dew upon the soil to fertilize the land. People don’t work in fields or vineyards during this week as a way to honor the nymphs for the life-giving waters they bring. Whenever anyone dares to venture out during the week, he tucks wormwood, garlic, and walnut leaves inside his shirt, or attaches them to a belt, to protect himself from the Rusalki, as well as other creatures or spirits that may be wandering about the forests, mountains, or water bodies. Sensitive to strong smells, Rusalki avoid those carrying such herbs and flowers.

Just as important, people refrain from bathing or washing clothes on this day to prevent Rusalki from dragging them into the depths of the water and drowning them.

On Wednesday and Friday of Mermaid Week, Rusalki gather in groves where their favorite flower, the Burning Bush (dictamnus albus) grows. Its Bulgarian name is rosen, which means dew. These places are holy and sacred to the Rusalki. They pluck the tips from the flowers to place in their hair. The flower’s fragrance is intoxicating like a drug. Thus adorned, the nymphs worship nature with their magical songs and dance.

While wearing rosen, Rusalki become kindhearted and often heal those who sleep in the meadow. One famous place is the village of Resen, which gets its name from the flower. Sleeping in the meadow is not enough to ensure a cure, however. People perform a special ritual called “walking on the dewy rosen grass.” The sick go to the meadow in the evening, being careful not to let anyone see them. They each find an isolated place amidst the flowers and eat their evening meal. Then, before sunset, each one spreads a white handkerchief next to them. They cover their heads and remain silent, drifting off to sleep.

During the night, the Rusalki arrive, bearing their queen on a chariot of human bones. Those who may still be awake claim they hear laughter and songs. If a person who has lost a limb is among those gathered, the Rusalki may say, “Restore (person’s name) leg.”

At sunrise, the sick check their handkerchiefs. If empty, it means the Rusalki chose not to cure the person. For those the nymphs decide to grant the person a miracle cure, they leave various objects. The person mixes it with water and drinks it slowly. Dirt left on the handkerchief is a sign the person will die from their disease.

Regardless of what the nymphs leave or don’t leave, everyone places pitka (ritual bread) on the handkerchief for the Rusalki when they return. Pitka holds a special place in all Bulgarian rituals and holidays. It is broken, not cut, because it’s believed the bread itself has a soul.

The Rusalki are not the only ones to perform healing during Mermaid Week. At one time, on Sunday, rusalii, men who got their name from Rusalki, went from village to village 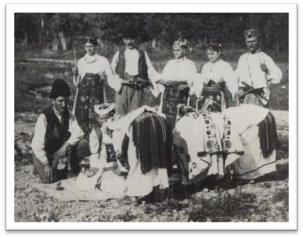 healing the sick with their ritual dance. In particular they healed those whom the Rusalki had cursed, often those who chose to work during their sacred week. It was taboo for the men to talk, make the sign of the cross, or step in water because they were in a semi-trance, linking them to both the human and spiritual worlds. Armed with a white flag decorated  with herbs, a special colorful stick, caps with herbs entwined, bells attached to their ankles, and a pot of vinegar and garlic, they were prepared to cure the Rusalki-induced illness. (You can read about a re- enactment of this ritual in Mystical Emona: Soul’s Journey.) 