On a recent holiday to Ireland, which was action packed, my sister suggested going to visit The Hill of Uisneach, a local place steeped in mythology and history. I’d been feeling tired, trying to fight off a cold so the thoughts of climbing hills didn’t appeal to me in the least. Still, it was a nice gesture so I said I’d love to go. 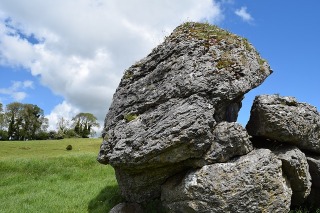 It was a muggy day, not too cold but, as is often the case, the sky was heavy with swift-moving clouds in tones of dirty white to grey to slate. Ah, but when the sun peeked through the moody sky, it cast a beautiful light over the landscape.

The drive itself took about fifteen minutes. My brother was wise enough to take a map and I sat back and enjoyed the rolling hills and forty shades of green. The landscape became hillier as we approached the site. Gorse and Mayflower were blooming in abundance and we passed a hedge of wild Hortensia nestled amongst the verdant vegetation. Although we saw no sign of the Hill of Uisneach, my brother looked up from his map. “It must be around here somewhere.”

We pulled up to a little lay-by near a small bungalow directly on the main road.

“Why don’t we just knock on the door and ask,” I said.

“Fire ahead then,” both answered in unison.

So I did. I noticed on the other side of the road there was an impressive driveway with wrought-iron gates and a stylish brass sign which gave the name of some stately-sounding house like Lugnaghsea House or something to that effect. Feeling like an intruder, I had to walk around to the side of this smaller lodge house to find the entrance.

The open vegetable patch at the back and the compost heap, along with a few colourful bits and bobs indicated that this was the house of a person totally into new alternative grow-your-own vegetables and ‘let’s get back to nature’ trip. The back garden was separated by a fence and a gate which opened up to more hilly fields and low stone walls.

Before I had a chance to find the buzzer, the patio door was opened with gusto and a youngish fellow came out.

“Hi,” I said.  Sorry for intruding, but we’re looking for the Hill of Uisneach.”

“Yep, it’s right behind this house,” he said.  “Just climb over the stile, take the path along the gorse bushes and head straight up towards… .”

I heard the word palace, cat stone, centre of Ireland and sort of dazed off, assuming my siblings were taking it all in too. I was wondering what this place was all about and regretted not having done my research beforehand.

“Just hold on a second and I’ll give John, the landlord, a call,” he said.

“No, he bought the land about ten years ago. He has lots of cattle in the field, and a couple of bulls, so I’d better check with him first.”

He clicked a few numbers on his mobile and I heard him tell the landlord about us and our quest. “No, I don’t think they have a dog,” he answered. He finished his call and told us it was fine, we could go ahead and check it out.

We thanked him profusely and climbed over the style. My sister went marching off, followed by my brother while I wandered behind them.

“Where do we go now?” my sister turned around.

“Why, weren’t you listening too?” I asked, slightly ashamed of my lack of concentration. I pointed in the general direction and we laughed as we looked ahead. A herd of cattle stood on the hill and even as we proceeded those few meters, they lined up in unison.  It was as if they were protecting their space and may possibly attack if we took one more step.

In the distance, a man on a motorised buggy made his way towards us.

My sister and brother were already chatting to the fellow in the buggy as I made my way towards them, doing my best to avoid cow pies and squelchy bog land. Although I had five pairs of shoes in my luggage, I’d not taken my walking shoes and was wearing my favourite leather boots.

The man was friendly, and informative, if slightly bemused. He pointed behind him, ‘The palace is up above’ and then turned to me, saying, ‘Now, don’t get your hopes up!’Ah, that Irish humour. What a strange image that conjured up – palace – in the middle of a landscape of fields. Wise man, I thought. Buying this land. It’ll be a place of pilgrimage in a few years. It’s already started. 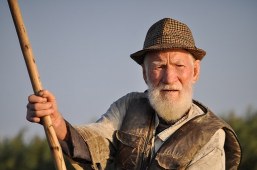 He told us a group of locals had come to celebrate the Bealtaine Fest and how a group of pilgrims showed up a couple of months ago. He was right when he said most of the locals have never been there. I grew up in the vicinity and had never been there either. But I’d left when I was eighteen. That group he’d told us about were from Germany and they’d walked from Fore (another local historic site) all the way to this place. They knew more about it than the locals.

“This is a serious spiritual place, if you’re into that sort of thing,” he said.  “It’s even older than The Hill of Tara.  When you reach the summit, you’ll be able to see all the bordering counties. You’ve got Lough Ennel over to the left, the Slieve Blooms in front of you, and … .”

I was already there in my mind, wandering through the mystical navel of Ireland.

He pointed out the lake, the palace and the cat’s stone, which we did finally find. It was like a dolmen. According to various sources, the original stones at Stonehenge were transported from this place to our neighbouring island. I wouldn’t even begin to imagine how that feat was achieved. Supposedly it is so named because it resembles a cat holding onto a mouse.

Now, I have a pretty good imagination but there’s no way I could see that resemblance. We never did find the palace, not that I expected to. Of course it referred to the remains of an old castle so it was probably one of the small groups of stones we came across.

When we entered the sacred enclave, like a fairy fort, in the centre of which was a circular formation of small stones, my brother said.

“Here, can you feel the energy.”

Well, I had to be honest. I didn’t feel anything particular, no tingling, no sense of long-dead ghosts, but I did feel as if I was in an altered state of reality. It was similar to the feeling I had when I recently went to another sacred place here in Germany. It was as if this place was suspended in a protected honeycomb of serenity.

‘Feel that rush of warm air,” my brother said. I never could be sure whether he was having me on but I sensed he was serious. We all stepped back out and in again through the portal of fairyland.

“Yes, now that you mention it … .” The power of suggestion never ceases to amaze me, but it was palpable. 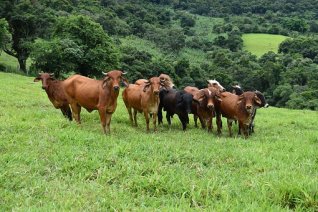 A soft mist enveloped us as we carried on, finally reaching the summit where we had a fantastic view of the surrounding lakes and hills. The purple hills appeared to touch the low-lying rain-filled clouds. The soft mist turned to soft rain and finally into continual rain as we squelched our way back to the car, each of us locked in this special moment and drenched in long-lost memories of ancient druids and another time on this island. 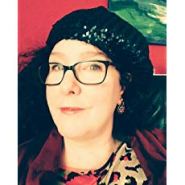 Liz Doran was born in London, grew up in Ireland and lived in the U.S. for five years. She now lives in a small village in Westfalia, Germany. Liz has been penning poems and writing for many years. Now that her sons have flown the nest, she has more time to dedicate to writing. Sometimes you have to take the long and winding road to your goal and Liz believes that all of life’s experiences make writers richer. Writing and reading is a form of escapism. We escape from the madness; we create worlds and characters which enable us to dip our toes into different realities. She often still wonders what her characters are up to now that the story has been written. Because that’s what it’s like, at least for her. You’ve set them up and put them in a place, created a story and left them there. And if your story hits a nerve with people it’s worth all the hard work.