“Come on, Allie, wake up! Your fever’s broken. You’re out of time. We’ve got to get out of here. They plan to kill you!

A girl with big dark eyes looked over her shoulder from the look-out position near the hallway. “Shh! Keep it down, Mitch! Get her upright. She’ll be worthless until she gets some fluid and one of those energy bars inside her.”

He lifted the pale girl to the edge of the bed and propping her up, touched a glass of water to her lips. “Allison, take a sip. Open your eyes and look at me. I need you to pay attention.”

The weak girl made a protesting sound but took a sip of water. Her eyelids fluttered. “Where am I?” 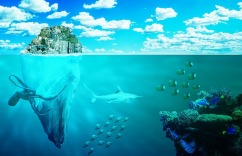 Sensing his building impatience, the girl at the door whispered sharply, “Tell her and get her to eat the bar!”

“All right, all right, Pilar!” Mitch returned his focus to Allie. “Listen now. I’ll tell you but not until you take a bite. The food will help you feel more like yourself.”

“We’re in the medical research pod of Oceania Four, the Underwater Habitat west of California. They recruited a hundred and twenty of us to help the scientists find ways for humans to adapt to living and working for long periods of time underwater. Do you remember any of this?”

Half of the bar eaten, and Allison was sitting up on her own. “Vaguely. It’s coming back. Keep talking.” 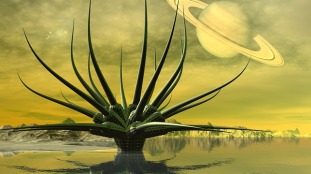 “We came here to work in the labs. Our college debt would be forgiven and they guaranteed us research jobs.”

“So… I got sick?” With one bar gone, Allie started on the second. She could focus now and glanced around the dimly lit room as she listened.

“We all did. It turns out we’ve been guinea pigs for their gene manipulation experiments.”

“Oh shit. Give me the bottom line.” Allison slipped off the bed and onto her feet. Shaking, she reached for the glass of water and a third of the highly efficient power bars.

“Forty-nine died screaming in agony. Thirty-four mutated into… things beyond nightmares. Eighteen of us made it through the fever and were lucky enough to wake at night and slip out of the facility between security shifts. We come in at night, watching the ward. We’ve come back for you but we’re nearly out of time. There’re eighteen remaining but still desperately ill. They’ll not get a chance to win or lose their personal battle in the cellular war. One of us overheard the administrator. The decision’s been made to do a major cover-up and ‘sanitize’ this facility. They plan to euthanize all their test subjects in the morning. That means us… if we’re caught!”

He glanced over at Pilar who still watched the hallway but had begun move restlessly. “Are you up to moving Allie? Security will make their rounds soon and we need to be away. Slip into this skin suit. We’ll be getting wet.”

As she tugged on the strange, slightly opalescent-translucent garment, she muttered, “Two more questions: Why weren’t you rounded up and why did you recover but not the others?”

“Different gene splicing for different groups. Even then some couldn’t adapt. As for how we got away? They couldn’t find us.”

Mitch leaned into the hall then Allison and Pilar eased past him and the three ran down the darkened passageway on almost silent feet. Turning a corner, they heard security approaching. All three stepped into a shallow alcove. Mitch put his finger to his lips and winked reassuringly to Allie. Unbelievably, the night patrol passed them without notice.

Once security was out of sight, the three darted into motion. They slipped inside a darkened room where the ocean portal lapped softly. This was where dive teams accessed the encompassing water world. Pilar nodded to Allison and, without an air tank, slipped into the circular pool and disappeared.

Mitch put his arms around her reassuringly. The hug was brief and when the dark-haired grad student stepped back, he squeezed her hand and gave her a serious look. “Trust me.”

With no further warning, his hands moved to her shoulders and pushed. Allison fell into the sea with a splash, sinking into the dark blue depths. She felt a disturbance and Mitch joined her. Grinning, he tugged her hand as his voice came into her thoughts. “It’s okay Allie. We can breathe here, too! ”

He led her through bright anemones and shy yellow spotted fish. They swam deeper into the labyrinth of the coral reef until it opened into a large grotto. Pausing, Mitch winked. “Now you see me…” Within seconds he was indistinguishable from the red coral outcropping. As he vanished, seventeen people coalesced from the rock and sea fans! They had mimicked the reef so perfectly they’d been invisible! Mitch reappeared. He reached out to touch the frond of a waving fern. Startled, a camouflaged octopus became visible and jetted away in a cloud of ink.

“They spliced our genes with those of an octopus. The resulting mutation has changed our blood so we can tolerate the ocean temperatures. We’ve gills, too and have developed chromatophores in our skin so we can camouflage completely. We can’t go back home, but we have each other and this world.”

Suddenly, there was a percussion wave and an enormous air bubble exploded from the habitat. Debris rained down on the nineteen in the reef.

Shocked, they watched water flooding the station through a ragged hole in the structure’s wall. The entire research pod had vanished.

“Oh. My. God!” Allie’s tears were part of the sea. “We’re now the only ones who know what they did. I hope they think us dead.”

Mitch tugged on her hand as they turned and disappeared.

Holly Barbo’s world is shaped by her love of family (which includes an adorable rescue kitty who has stolen her heart), the beauty of nature and an irrepressible curiosity that frequently has her turning over rocks and questioning what she finds. This sometimes sends the reader down a rabbit hole into an alternate view of the world than what they expected. Holly’s mind can be an interesting place.
Holly weaves alternative worlds with threads from today as she spins stories in many different genres. You can discover more about Holly here: http://hollybarbo-books.com