My name is Logan and I am 11 years old. I can’t read or write too well because I have a problem with my tummy and I have to take a lot of medicine and I can’t go to school all the time. 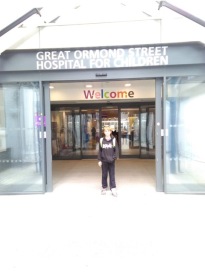 This is when I arrived.

My mum writes books and she has a special app where I can talk and the app writes the words, that is what I am using to write this story.

A few months ago I had to go to Great Ormond Street Children’s Hospital for a week. I live in Wales and it was a long way to go to London. I was a bit scared but it’s a really nice place and it doesn’t really look like a hospital. I asked my mum to find some photos to show you.

The people who work there are really great and they looked after me and my mum could stay in a special sleeping chair next to my bed. The food was good, everyone was nice that and they treated you like royalty, it’s like the nicest hospital in the world.

I had to have a cannula in my hand. I didn’t really want to, but it didn’t hurt as much as I thought it would. I also had to have a tube that went down my nose and into my tummy to give me medicine. That had to stay there the whole time, even when I was sleeping and at first it hurt my throat a bit cos it went there from my nose, but I kinda got used to it. 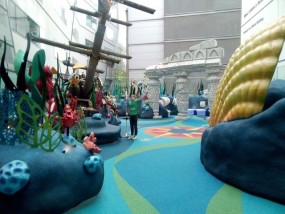 This is the Disney themed outside space, even though it is outside it is surrounded by buildings that are really tall. 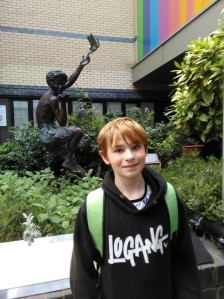 At the end of the week they did lots of tests so that they could tell my mum what’s wrong with me and they told me stuff about me and what they would do and one of the best parts about it was they said they would put me to sleep with this gas and it made me laugh a lot before I went to sleep. It was so cool.

There were special play people who came around to see if there was anything we would like to do and there were lots of toys and stuff to do.

The day that I had my tests, I had to stay in bed for 7 hours hooked up to a machine which put readings onto a kind of TV for the doctor to see. The play lady asked if I wanted to watch a DVD. I said I’d like to see The Greatest Showman, but they didn’t have it there, so the play lady was so nice, and she searched all the different wards in the hospital until she found it for me. I watched it twice.

I have got to go back to Great Ormond Street soon to have surgery. I won’t be so scared this time even though I don’t really want to have surgery. I guess what I want to say is that if you have to go to hospital then sometimes in your head it is more scary than it is in real life. 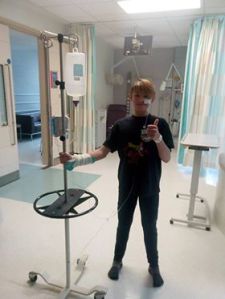 This is me all hooked up to my medicine in the tube down my nose. I had to push it around if I went places.

Everybody at the hospital was so nice. They explained everything that was happening and told me what to expect and, in the end, it wasn’t so bad after all.

So my advice is if you need to go to that place and you don’t want to, don’t worry it’s fine and everything will be good the end.