Christmas is just around the corner and there is an atmosphere of festivity and fun in the streets. We may now associate the word Christmas with thoughts of presents, of Santa Claus, of mulled wine and decorated trees. But have you ever considered where the word originally came from? 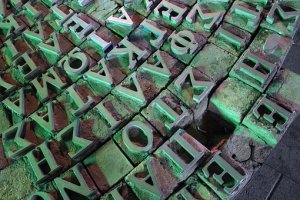 A Greek and Latin Pairing

In order to find its origins, we are going to split the word into two parts: ‘Christ’ and ‘mas‘. You might now think that it is obvious – Christ is the central figure of Christianity, after all. But there is more to the story than that. Christ is not simply a name. It was originally used as a kind of description of what Christ was believed to be. It comes from Greek, from the verb χρίζω [chrizo], which means to annoint. The adjective derived from χρίζω is χριστός [christos], meaning ‘annointed’. Christ, therefore, is the annointed one.

Let’s take a look now at the second element of the word: mas. This comes, perhaps unsurprisingly, from ‘Mass’, the name given to the Eucharistic service in the church. Yet again there is a little more to the story than that. Mass comes from Latin missa, which is the feminine past participle of the verb mittere, which means ‘to send, dismiss, let go’. You may be thinking that this is a very strange word to use to refer to a religious service, but there is an explanation. For centuries, the mass was held in Latin, and this word, missa, is one of the closing words of the service. For English speakers who had little or no real knowledge of Latin, this would have been one of the last words they heard every time they attended the service, and as such, it would have stuck in the mind, until it gradually became the name for the service itself.

Christmas Around the World

A number of languages use words for “birth” to denote Christmas, to signify that it is the season of Christ’s birth.

In Greek, it is Χριστούγεννα [Christouyenna], from the genitive form of Christos, “Christ” and yenna, meaning “birth.

German Weihnachten is made up of two elements: weihen and Nachten. The first part, weihen, is a verb meaning “to consecrate”, or perhaps “hallow”. The second part means “nights”. This makes it “Consecrated (or “hallowed”) Nights”.

Swedish, Danish, Norwegian jul and English yule all come from Old Norse jol, a mid-winter festival pre-dating Christianity that was adopted by Christians and given a Christian theme.

In Hungarian it is karácsony, which is a Slavic loan-word, possibly from Bulgarian. Variants of it can be found in various Slavic languages to refer to the mid-winter solstice or mid-winter festival.

Millie Slavidou, author of the Lucy Evans Instaexplorer adventure series for preteens, featuring little snippets of language, and Sparky, a first chapter book for early readers.
You can discover more about Millie on the Mom’s Favorite Reads website here:
https://moms-favorite-reads.com/moms-authors/millie-slavidou/