In the October issue, you learned about Baba Vanga (1911–1996), a clairvoyant and znahar, a woman who heals with herbs and possibly a little magic. Many people say these women obtain their ability from a saint, angel, or Samodiva (woodland nymph). Vanga’s relative’s, however, said her power came from the healing mineral springs where she lived the latter part of her life—Rupite, located in the mountainous region of southwestern Bulgaria. The house she lived in still remains situated at the foot of an extinct volcano. Vanga believed three temples existed below the surface: “Saint Petka,” “Saint Mary” and “Saint Panteleimon.” 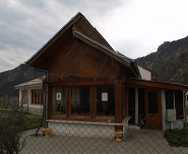 In her book she says:

“Thousands of years ago, on the 15th of October, a volcano erupted. […] The fiery abyss that devoured this town is now sending us its hot vapors to heal us. These are the exhales of the innocent people who died here. My plea to all of you is to continue to commemorate this day, to honor the memory of all people who have died all that time ago.”

In Baba Vanga’s honor, the Saint Petka Bulgarska church was build in the town. Visitors from around the world come to the chapel for spiritual and physical healing.

“The thermal water here at the Rupite has great healing power. It is magical. You can drink it or bathe in it. It can cure illness of the stomach, kidneys, liver, muscle atrophy, backache. It can cure everything. Let your children walk barefoot here, bathe in the water.

“Don’t try making money from this spring! People come here, digging, excavating… You should know that this spring cannot be turned into a business. If you start selling this water, it will disappear, and God knows only where it will reappear. Look after this water. I’ve been telling you, times will come when you will sell your gold jewelry for water.”

Food for the Soul
Besides the power of the springs, Vanga and other znahars heat honey and include it in many of their remedies—for both internal and external use. Perhaps this is because it’s a favorite food of the gods and mystical creatures, especially Samodivi. In Bulgarian folklore, honey also plays an important role as an offering to these nymphs. You don’t have to be a healer to use honey. I’m sure the sweet treat is already part of your dietary plan. If not, you definitely should try it. Substitute sugar with honey in your tea.

Do you know the story behind honey?

According to mythology, the first beekeeper was Aristaeus, son of Apollo and water-nymph Cyrene. Legends credit this demigod with inventing beehives. To collect honey, he wrapped his body with linen as protection from bee stings. He tricked bees into letting him retrieve honey by swinging a torch around until smoke filled the hive. Then he beat metal plates together to drown out the buzzing. The confused creatures didn’t bother him as he reached into the hive to gather combs.

While Aristaeus was in Thrace, he met Orpheus’s wife Eurydice, and fell in love. She fled from him and stepped on a snake, which bit her heel, killing her. The nymphs punished him by making his bees fatally ill. With the help of his mother, Aristaeus tricked the prophet Proteus into telling him how to regain his bees. He had to appease the nymphs by slaughtering four bulls and four cows, all perfect and beautiful. When he had completed the task, Aristaeus examined the sacrificed animals, discovering a swarm of bees in the carcass of one. This led people inantiquity to believe bees were born from decaying flesh.

Quick, Tasty Recipe
Bulgaria is also famous for its yogurt, which was created in there. In fact, the bacteria used in their yogurt is Lactobacillus bulgaricus. It’s used in recipes for breakfast, lunch, and dinner.

Tip: When buying yogurt, make sure this bacteria is listed in the ingredients

Here’s a delicious dessert that’s healthy and easy to make. Your kids will love this no-bake treat that’s full of protein.

Spoon the yogurt into a small dessert dish. Sprinkle crushed walnuts on top. You can toast the walnuts lightly in a hot skillet if you’d like, to bring out more of their natural flavor. I like to put them in water, then rinse and sprinkle them with brown sugar. Next, put them on a paper towel and bake them for one minute in a microwave. Once they’re cold, sprinkle the nuts over the yogurt. Then top it with cinnamon and drizzle with honey. Serve and enjoy! And don’t forget to make a tea with a spoonful of honey.

Ronesa Aveela is “the creative power of two.” Two authors that is. The main force behind the work, the creative genius, was born in Bulgaria and moved to he US in the 1990s. She grew up with stories of wild Samodivi, Kikimora, the dragons Zmey and Lamia, Baba Yaga, and much more. She’s a freelance artist and writer. She likes writing mystery romance inspired by legends and tales. In her free time, she paints. Her artistic interests include the female figure, Greek and Thracian mythology, folklore tales, and the natural world interpreted through her eyes. She is married and has two children. Her writing partner was born and raised in the New England area. She has a background in writing and editing, as well as having a love of all things from different cultures. Together, the two make up the writing of Ronesa Aveela. You can discover more about Ronesa on the Mom’s Favorite Reads website here: https://moms-favorite-reads.com/moms-authors/ronesa-aveela/

Check out our Free January  2019 magazine