Andrew Cartmel is the author of the deliciously devious Vinyl Detective novels, as well as a popular writer of comics, including the cult hit Rivers Of London, but has also been a journalist, script editor, and familiar face about conventions for some time.

May I begin by asking about the Vinyl Detective books? Would you like to introduce them to the readers?

They are suspenseful and thrilling crime stories set in the world of record collecting, with a wry streak of humour and some engaging characters — especially the cats.

The books are incredibly researched, in history, locations, and of course, music (with all the fictional details being a step or two from reality). Are these insights to your own passion?

Absolutely. Although I have also done considerable research on areas that aren’t among my personal interests — e.g. folk music.

I love the way the reader is drawn into the record hunting world, even if they are complete musical heathens like myself. Is there a secret to finding a balance between making your characters an expert in their field, but blinding the casual reader with detail?

You need to include enough to make this specialist world come to life, but at a certain point the writer needs an alarm which goes off and tells them when they’re including too much. I think I’ve got such an alarm myself — in any case, I often trim back this sort of material in the books. 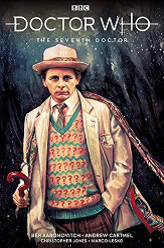 By now the regular cast of characters must feel like old friends. Do you ever feel them looking over your shoulder as you write (or choose some music)?

I never feel them looking over my shoulder but I do welcome their active presence when they begin to contribute lively (and often profane dialogue) — which, thank heavens, they always do.

The cats in the books have a lot of personality too, are they written from experience?

They’re shamelessly based on my own cats, Jade and Molly.

The Vinyl Detective has a very different feel to your other trilogy of books, the Rupert Hood novels. Are you ever tempted to go back to the grittier world of spies?

I did the best job I could on the Rupert Hood books and I had a lot of fun with them, but my heart was never really in writing spy stories. My heart is very definitely in the Vinyl Detective.

Rivers of London has been a critical success.  Would you mind introducing readers to the series?

My friend Ben Aaronovitch has written a series of police procedurals that concern the branch of the of the London Metropolitan Police who deal with the supernatural. They’re not just a critical success, they’re big bestsellers, and you should give them a try. They’re great. Oh, and we’ve spun off a series of comics featuring the characters and I co-write those with Ben.

Is a comic book a different challenge?

How does it feel to take somebody else’s world and expand it out from a novel into a more visual world?

Although it’s Ben’s world, I’ve been intimately involved in it since he created it — reading early drafts and offering commentary and advice. And also simply enjoying it. As for making it a visual world, both Ben and I are screenwriters (we worked on the television series Doctor Who together) and both of us write quite visually even when we’re writing prose novels.

To the layman it seems like it must be a very different kind of process, to work with artists who will have to create the imagery from your words. Is this a close working relationship?

Sometimes, but the editors tend to like to keep the writers and artists well separated.

Some readers will have had the chance to meet you at conventions. What’s it like being on that side of the table?

Which side? My side? It’s always nice when people come up and say hello. In fact it gets boring if they don’t — so come and visit me!

Between stage, screen, audios, novels, and stand up, you have worked in an incredible variety of mediums. Is there any one that feels like ‘home’ or is variety the spice of life?

Novels are the ultimate in the terms of self expression, but I also have a real love for writing stage plays. There’s something about actors making your words come to life and giving a live performance in the same space as the audience.

As a script editor Andrew spent a few years behind the scenes of the BBC series Doctor Who. His memoirs of the era, Script Doctor, are an honest, and often amusing, read.

What spurred you to revisit your time on Who?

I was lucky enough to have kept a diary of that period and it was a thrill being able to bring it back to life authentically and in detail in that book.

How do you prepare yourself for such a personal journey?

I just went through my diaries.

Was there ever anything you weren’t sure about including?

I soft-pedalled a few things. I didn’t name names when, for example, people were smoking weed.

Do you still watch the show? Is there anything that made you think “Oh, I wish I thought of that!”?

I have a standard answer when people are surprised that I don’t watch the show: “It’s like seeing your ex-wife happy with someone new. (You’re pleased for her, but you really don’t want to know too much about it.)”

Would it be okay if I asked for your views on the minority of fans who have been upset by the “preachy” and “too political” new run?

I couldn’t offer an opinion without having seen it myself.

During Andrew’s tenure on the show, Sylvester McCoy’s Doctor was certainly not afraid of being political. Like many kids of my generation, the first time I saw a lot of adult themes addressed , ranging from Fascism, and racism, Thatcherism, troubled youths, and the politics of weapons for mass destruction, was from behind a sofa, through the eyes of the Doctor’s companion Ace.

Did you have a particular ethos for approaching such topics, knowing that many of those watching were kids?

I don’t think it’s controversial to suggest that blowing up the world with nuclear weapons is a bad idea.

In the early 1990s, having finished on TV, the show was given a new lease of life as a range of novels for adults, from Virgin books. Some of the early entries made headlines for their decidedly adult content. Andrew wrote for the series, starting with his novel Warhead.

What are your recollections of the New Adventures being released?

I turned down the deal because the money was too low. So they came back with an improved offer and as a consequence all of the writers on the New Adventures got paid more.

Warhead, along with Mark Gatiss’ “Nightshade” is one of the novels with a reputation amongst fans for helping cement the identity of the range as “adult” as in “approaching a topic in an adult way”, rather than “explicit”, which can’t be a bad reputation to have?

As the writer Patrick O’Brian once remarked, “All I really want is praise.” So I’m happy to accept that.

Was there a different set of rules for writing the show as a novel?

The Doctor can — and perhaps should — appear a lot less than he does on screen.

Did you find the ‘infinite budget of the mind’ freeing?

Sure, but what is even more appealing about prose is the concision. You can write, “The war raged fiercely for thirty years, and then it ended.” That’s one sentence. Imagine trying to express that on screen.

Is there anything else you wish to share with readers or writers?

If you enjoy crime fiction, please try one of my Vinyl Detective novels. Borrow a copy from the library and see if you like them.

Any new or upcoming projects we might want to look out for?

Plans are afoot to put on a production of my stage play ‘Screwball’ in London the summer of 2019. And my fourth Vinyl Detective novel is published in May 2019. Do check them out.

Thank you for your time. 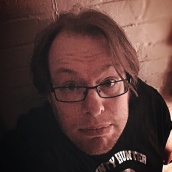 T.E. Hodden trained in engineering, and works in a specialised role in the transport industry. He is a life long fan of comic books, science fiction, myths, legends, and history. In the past he has contributed to podcasts, blogs, and anthologies. You can discover more about T.E. on the Mom’s Favorite Reads website here: https://moms-favorite-reads.com/moms-authors/t-e-hodden/

Check out our Free January 2019 magazine