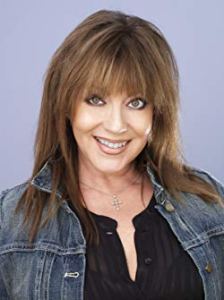 Lesley-Ann Jones is a British biographer, novelist, broadcaster and keynote speaker. She honed her craft on Fleet Street, as a newspaper journalist.

Recent works include ‘Bohemian Rhapsody: The Definitive Biography of Freddie Mercury’, and ‘HERO: David Bowie’. Lesley-Ann is also about to publish her debut memoir, ‘Tumbling Dice’, in early April 2019. She is also working on another biography for Bonnier Publishing, which will be announced at the London Book Fair in March 2019.

She is the mother of three children, with whom she lives in London.

“Lesley-Ann Jones certainly did her homework in trying to track down details of the elusive singer’s life.”

“A fine piece of research, written in an elegant, flowing style.”

Ride a White Swan: The Lives and Death of Marc Bolan – Nonfiction, Biography

“Ms Jones’s book was gripping from start to finish. It was gratifying to read a biography of Marc Bolan that isn’t fluff!”

Naomi: the Rise and Rise of the Girl from Nowhere – Nonfiction, Biography

“Myths and rumours abound concerning the real Naomi Campbell. Is she Supermodel or Superbitch?”

“A well written, informative and revealing biography by someone who knew him well so that we, as readers, got to know him even better.”

“Brilliant, unputdownable, a tour de force. The best book about celebrities that I have ever read. I wish I’d written it.”

“Fast moving, bursting with intrigue and with a sprinkling of Kill Your Friends , this novel is a must for readers who like the shine and shadow of the showbiz world.”

WHAT THE MUSIC INDUSTRY IS SAYING ABOUT LESLEY-ANN’S BOOKS

‘TUMBLING DICE’, the debut memoir by the Sunday Times Bestselling author of ‘Bohemian Rhapsody: The Definitive Biography of Freddie Mercury’ to be published in April 2019.

Published by Hodder & Stoughton September 2016. Voted one of the Top Ten Music Books of 2016 by the London Evening Standard, and also one of their Top Eight Biographies/Memoirs.

Lesley-Ann Jones knew Bowie from childhood. They became friends, and he inspired her to become a music journalist. Her biography is a very personal portrait that explores the real man behind the spaceman, the countless facets of his self- reinvention, the golden years and the wilderness periods, his torments and triumphs, his music, artistry and personal life. It has received excellent reviews.

‘Through several interviews with Bowie she evocatively portrays his fascinating life, often with a tenderness you wouldn’t expect.’ DAILY EXPRESS

‘This is a fascinating insight into one of greatest artists of our lifetime.’ EVENING STANDARD

‘An intriguing book. This is a personal friendship in writing. The knowledge divulged here is an endearing and powerful tale of a man who conquered the entire entertainment industry with his creative force.’ HENRY DEAS, VARIETY

Published by Hodder & Stoughton in hardback, paperback, Kindle and audiobook. Also published in the United States as ‘MERCURY’ by Touchstone/Simon & Schuster, and available in many translations, including, Spanish, German, Italian, Dutch, Polish, Portuguese, Swedish, Japanese and Lithuanian.

‘Mercury goes beyond the glittering facade to get an unvarnished look at Queen’s rise to fame, the loves of Mercury’s life and his fraught relationship with his conservative past, creating a complete portrait of this magnetic musician.’  METRO SOURCE, NEW YORK

‘This book grabs you with its opening, then builds. Insight and anecdote in perfect harmony.’ SIMON NAPIER-BELL

‘The sort of tribute Mercury himself would have wanted … full of perceptive and moving   insights.’ SPECTATOR

‘One of the best biographies I have read recently is Lesley-Ann Jones’s biography of Freddie Mercury, published to coincide with the 20th anniversary of his death. No-one has captured better the magical, enchanting dualism of Freddie Mercury – the mystery of the battle between dark and light that is at the heart of the Zoroastrian religion of his birth as well as of his own life. To read this book is to rejoice that such a man ever lived and sang, while at the same time to be overwhelmed once more at the grief of his death and what took him from us. The author has the rare gift of being scrupulously honest about the subject, while maintaining throughout a kindliness that reflects truly the ruthless charm at the heart of all he did.’ RUTH GLEDHILL, SUNDAY TIMES

RIDE A WHITE SWAN: THE LIVES & DEATH OF MARC BOLAN

Published by Hodder & Stoughton in hardback and paperback:

‘I remember the time I spent with Marc and June in the late ’60s with massive affection. It was a wonderful, exciting and creative time. Lesley-Ann Jones captures perfectly the spirit of the time, and tells beautifully the wider story of Marc’s extraordinary life.’ BOB HARRIS OBE

‘Important missing pieces of the complicated short life that was Marc Bolan’s. It is a sensational read… What I especially love is that this new book comes from a woman’s point of view. She tells Marc’s story in a very nurturing and loving way. I highly recommend it to all Marc Bolan fans.’ TONY VISCONTI – RECORD PRODUCER, DAVID BOWIE, MARC BOLAN, MORRISSEY

‘Brimming with insight from family members, friends, managers, musicians, and white-knuckled rock and rollercoaster riders who shared the dips and dives of Bolanmania, this book is a cracker of a read.’ KEITH ALTHAM – ROCK WRITER & PRESS AGENT, THE WHO, THE ROLLING STONES, BEACH BOYS, SMALL FACES, VAN MORRISON & MARC BOLAN.

‘Lesley-Ann Jones brings my old friend almost back to life in this brilliantly observed and detailed account of a fascinating man who lived an all-too-short life. The first book to show us the real Marc.’ STEVE HARLEY – COCKNEY REBEL

‘A brilliantly documented and beautifully-written account of one of our greatest music legends.’ PHIL SWERN – PRODUCER, BBC RADIO 2

‘Rock hard, rock soft, and everything in between. It’s all here between the ‘sheets’ … Enjoy!!!’ SUZI QUATRO, rock legend

‘What a read! This book is funny, frightening, and terrifyingly accurate. It feels like I know everyone in it.’ ED BICKNELL, former manager, Dire Straits, Mark Knopfler, Bryan Ferry, Gerry Rafferty, & Head of William Morris Endeavour Europe

‘Do you remember where you were the day John Lennon died? LESLEY-ANN JONES WAS RIGHT BLOODY NEXT TO HIM. An amazing story told in an amazing way. Unputdownable.’ SIMON NAPIER-BELL, fabled manager of The Yardbirds, Marc Bolan, Japan, Wham!, George Michael & Sinéad O’Connor

‘A superb mixture of truth and nothing-like-the-truth. IMAGINE is the best possible combination you can have in any read.’ RICK WAKEMAN, musician and Grumpy Old Man

‘An irresistible Rock’n’Roll cocktail of fact and fiction, expertly mixed. Take one sip and prepare yourself for a ‘lock-in’ … ’ KIM WILDE, Pop Star & 80s icon

‘Lesley-Ann Jones has written a first-time classic. She extricates the glam out of every piece of grunge in this rock’n’roll myth-fest. IMAGINE broke my heart, and rebuilt it again, until it became like a favourite song: repeating over and over in a dreamlike paradise.’ LEO SAYER, singer songwriter.